Single-molecule force spectroscopy has provided unprecedented insights into protein folding, force regulation, and function. So far, the field has relied primarily on atomic force microscope and optical tweezers assays that, while powerful, are limited in force resolution, throughput, and require feedback for constant force measurements. Here, we present a modular approach based on magnetic tweezers (MT) for highly multiplexed protein force spectroscopy. Our approach uses elastin-like polypeptide linkers for the specific attachment of proteins, requiring only short peptide tags on the protein of interest. The assay extends protein force spectroscopy into the low force (<1 pN) regime and enables parallel and ultra-stable measurements at constant forces...  more  PDF

The process of hemostatic plug formation at sites of vascular injury crucially relies on the large multimeric plasma glycoprotein von Willebrand factor (VWF) and its ability to recruit platelets to the damaged vessel wall via interaction of its A1 domain with platelet GPIbα. Under normal blood flow conditions, VWF multimers exhibit a very low binding affinity for platelets. Only when subjected to increased hydrodynamic forces, which primarily occur in connection with vascular injury, VWF can efficiently bind to platelets. This force-regulation of VWF’s hemostatic activity is not only highly intriguing from a biophysical perspective, but also of eminent physiological importance...  more  PDF

The large multimeric plasma glycoprotein von Willebrand factor (VWF) is essential for primary hemostasis by recruiting platelets to sites of vascular injury. VWF multimers respond to elevated hydrodynamic forces by elongation, thereby increasing their adhesiveness to platelets. Thus, the activation of VWF is force-induced, as is its inactivation. Due to these attributes, VWF is a highly interesting system from a biophysical point of view, and is well suited for investigation using biophysical approaches. Here, we give an overview on recent studies that predominantly employed biophysical methods to gain novel insights into multiple aspects of VWF: Electron microscopy was used to shed light on the domain structure of VWF and the mechanism of VWF secretion...  more  PDF 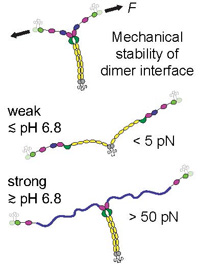 Von Willebrand factor (VWF) is a multimeric plasma glycoprotein that is activated for hemostasis by increased hydrodynamic forces at sites of vascular injury. Here, we present data from atomic force microscopy-based single-molecule force measurements, atomic force microscopy imaging, and small-angle x-ray scattering to show that the structure and mechanics of VWF are governed by multiple pH-dependent interactions with opposite trends within dimeric subunits. In particular, the recently discovered strong intermonomer interaction, which induces a firmly closed conformation of dimers and crucially involves the D4 domain...  more  PDF 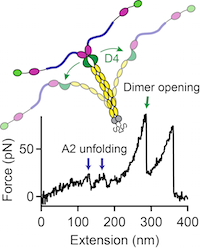 The large plasma glycoprotein von Willebrand factor (VWF) senses hydrodynamic forces in the bloodstream and responds to elevated forces with abrupt elongation, thereby increasing its adhesiveness to platelets and collagen. Remarkably, forces on VWF are elevated at sites of vascular injury, where VWF’s hemostatic potential is important to mediate platelet aggregation and to recruit platelets to the subendothelial layer... more   PDF 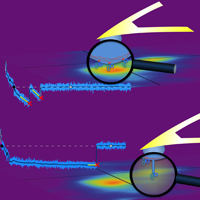 Complementary to parameters established for cell-adhesion force curve analysis, we evaluated the slope before a force step together with the distance from the surface at which the step occurs and visualized the result in a two-dimensional density plot. This new tool allows detachment steps of long membrane tethers to be distinguished from shorter jumplike force steps.... more   PDF

The discharge of the Cnidarian stinging organelle, the nematocyst, is one of the fastest processes in biology and involves volume changes of the highly pressurised (150 bar) capsule of up to 50%. Hitherto, the molecular basis for the unusual biomechanical properties of nematocysts has been elusive, as their structure was mainly defined as a stress-resistant collagenous matrix. Here, we characterise Cnidoin, a novel elastic protein... more   PDF

Von Willebrand Factor (VWF) is a multimeric protein crucial for hemostasis. Under shear flow, it acts as a mechanosensor responding with a size-dependent globule-stretch transition to increasing shear rates. Here, we quantify for the first time, to our knowledge, the size distribution of recombinant VWF and VWF-eGFP using a multilateral approach that involves quantitative gel analysis, fluorescence correlation spectroscopy, and total internal reflection fluorescence microscopy... more   PDF

Quantitative analysis of cellular interactions with the extracellular environment is necessary to gain an understanding of how cells regulate adhesion in the development and maintenance of multicellular organisms, and how changes in cell adhesion contribute to diseases. We provide a practical guide to quantify the adhesive strength of living animal cells to various substrates using atomic force microscopy (AFM)-based single-cell force spectroscopy (SCFS)... more   PDF 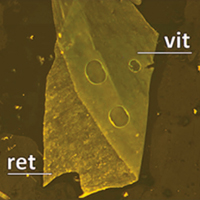 Vital dyes increase the rigidity of the internal limiting membrane 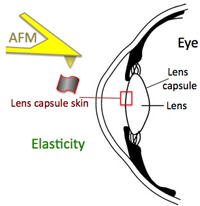 Cataract surgery was among the first ophthalmic surgical procedures in which dyes were introduced to assist the surgeon in more challenging cases, such as eyes with mature cataract. In mature white cataracts, a controlled capsulorhexis of the anterior capsule is often difficult to performdue to absence of the red fundus reflex. .... more   PDF

Probing the interaction forces of prostate cancer cells with collagen I and bone marrow derived stem cells on the single cell level.

Cell adhesion is an essential prerequisite for survival, communication, and navigation of cells in organisms. It is maintained by the organized binding of molecules from the cell membrane to the extracellular space. This chapter focuses on direct measurements of cellular binding strength at the level of single adhesion molecules... more   PDF

... Physicists say: “a cell…” while biologists say, “we took an endothelial cell from
the upper third of the dorsal endometrium in the early S2-phase of a 12 days old male…” For a cell-adhesion measurement with molecular resolution, the biophysicist has a dilemma. The information from the individual adhesion molecule is embedded in the concert of all the participating molecules of the cell including
the membrane and the cytoskeleton... PDF